The rare earth elements (REE) or lanthanides form the largest
chemically coherent group of elements in the Periodic Table.

“Rare” earth elements is a historic misnomer; persistence of the term reflected unfamiliarity rather than true rarity. Even the least abundant REE lutetium at 0.32 ppm is nearly 200 times more common than gold.While the commonest REE cerium at 64 ppm is about 5 times as abundant as lead. In mineralogy the term REE is often restricted to the lanthanides plus yttrium and lanthanum, they show very similar chemical behaviour and thus we shall treat them together here.
THE LANTHANIDE ELEMENTS
(with names and symbols)
Ytrrium,Y Lanthanum, La, Cerium, Ce Praseodymium, Pr, Neodymium, Nd Samarium, Sm, Europium, Eu Gadolinium, Gd, Terbium,Tb Dysprosium, Dy, Holium, Ho Erbium, Er, Thulium,Tm Ytterbium,Yb, Lutetium, Lu The element Promethium, Pm has no long–lived nuclei, therefore has no natural abundance. These elements have traditionally had a different naming system as compared to other minerals (recently adopted for other minerals). The name of the mineral has a suffix indicating the dominant REE in the formula e.g. bastnasite-(Ce) where known. The most abundant lanthanides are cerium, lanthanum, neodymium, and yttrium, and it is those elements that appear most frequently in mineral names.World production stands at over 107,400 thousand tons per annum. The main current producers are China, USA, India and Australia. Some of the numerous uses include catalysts, ceramics, metallurgy, electronics, TV phosphors in CRT and LCD displays, lasers, batteries, computers (in disk drives and DVD drives), permanent magnets, fibre optics, medical imaging equipment, lighter flints, polishing powders, automotive catalytic converters and lighting applications. Newer applications are found in magnetic refrigeration, fuel cells, super conductors, data storage and magnetostrictive alloys. Over 180 different minerals are known to contain essential lanthanides and this list continues to grow. Their representatives can mainly be found within the silicate, oxide, carbonate, phosphate, arsenate and halide classes.

Euxenite-(Y), (Y,Ca,Ce,U,Th)(Nb,Ta,Ti)2O6, forms orthorhombic, stout, prismatic crystals to 10 cm in size and may be flattened in character. Radiating and compact aggregates are also known. Twinned crystals are frequent. The colour is black to brownish black or greenish black with a brilliant submetallic,waxy to resinous lustre. It is opaque being translucent only on thin edges and has a yellowish, greyish or reddish brown streak. A conchoidal to subconchoidal fracture is present with a hardness of 5.5-6.5. The specific gravity ranges from 5.3 to 5.9. The mineral can be weakly radioactive. Mode of occurrence, chemistry and physical properties are useful for identification. It is a widespread species in modest quantities within granite pegmatites and as a component of detrital sands. Common associates include albite, microcline, biotite, muscovite, ilmenite, monazite, xenotime, zircon, beryl, magnetite, garnets, allanite and many others. Plentiful occurrences are known and some of these are found in Norway, Sweden, Russia, Italy, Madagascar, Brazil, Canada, USA and Australia.

Davidite-(La),
(La,Ce)(Y,U,Fe)(Ti,Fe)20(O,OH)38, is a primary mineral in high-temperature hydrothermal veins, norites, anorthosite, alkali rocks, granite pegmatites and carbonatites. Rutile, titanite, magnetite, ilmenite, apatites, tourmalines, epidote, albite, scapolite and calcite usually accompany Davidite-(La). Hexagonal rough crystals can be flattened, cuboidal or pyramidal in form.Twinned crystals are not rare. Irregular masses and grains also form. Colour ranges from black, grey, brown or reddish when altered.The lustre is vitreous to submetallic with a greyish black to dark brown streak. It is opaque, only translucent in very thin fragments. A subconchoidal to uneven fracture is noted and is brittle.The hardness is around 6 with a specific gravity of 4.3-4.4. It may be radioactive and is commonly metamict. Mode of occurrence, chemistry and physical properties are useful recognition features. Davidite-(La) is of worldwide distribution. Large crystals come from Mavusi,Tete district; at Matema and Campangula, Mozambique. Other places for samples are found in Australia, Russia, Norway, Sweden, Spain, Austria, Kazakhstan, USA and in Canada.

Fluocerite-(Ce), (Ce,La)F3, hexagonal crystals may be prismatic to tabular or flattened in habit. Intergrowth with oriented bastnasite and mutilamellar twinning is common. Massive, granular and pebble forms are also found. A prefect cleavage and a poor subconchoidal to uneven fracture are present. The hardness is between 4 and 5. The mineral may be pale yellow to colourless when fresh and reddish brown when altered. It is transparent to translucent with a vitreous to resinous lustre and pearly on cleavage surfaces. The specific gravity is high at 5.9 to 6.1. Physical, chemical and x-ray properties are used for characterization. Fluorcerite-(Ce) is a mineral of replacement bodies in zoned granite pegmatite environments and in hydrothermal deposits associated with greisenization. Bastnasite, cerianite, parisite, monazite, allenite, thorite, zircon, fluorite, microcline and quartz are frequent associates.A wide selection of sites has produced representative specimens and includes: Sweden, Norway, Germany, USA, Nigeria, Japan, Russia, Ukraine, Kazakhstan, Kyrgyzstan and Mongolia.

Bastnasite-(Ce), (Ce,La)(CO3)F, is the most abundant REE-bearing mineral, typically hydrothermal, in granite, syenite and pegmatites, carbonatites, in contact-metamorphic deposits and rarely in placers. Other enticing REE minerals such as allenite-(Ce), cerianite-(Ce), synchysite-(Ce), parasite-(Ce), fluocerite-(Ce) and fluorite, barite, pyrite, glaucophane and galena can occur with bastnasite-(Ce). Hexagonal tabular to equant crystals are common, may be modified by several forms and up to 20 cm in size. Horizontal striated crystals also occur and are frequently syntaxically intergrown with several other REE minerals. Granular to massive aggregates also occur. Several poor to perfect cleavages are present with an uneven fracture. The mineral is brittle and the hardness is 4-4.5. It is wax-yellow, honey-yellow to reddish colour and is transparent, translucent to near opaque. The lustre is vitreous, greasy to pearly. Specific gravity is 4.9 to 5.2 and is strongly piezoelectric in character. Physical and chemical properties are useful characteristics. Some of the copious sources are found in Sweden, France, Turkey, Russia, Afghanistan, Pakistan (large crystals recently, some faceted to over 18 carats!), Madagascar, Tanzania, Malawi, Zambia, USA, Canada, China and elsewhere.

Tundrite-(Nd), Na3
(Nd,La)4(Ti,Nb)2(SiO4)2 (CO3)3)O4(OH).2H2O, can be found as spherulitic masses up to 5 mm in size. The mineral is brownish to greenish yellow and is translucent in character with a vitreous lustre. The hardness is 3 and the specific gravity is 4.0. It has a white streak. Chemistry, x-rays and single locality may identify this complex triclinic carbonate-silicate. Tundrite-(Nd) occurs in pegmatite veins associated with a layered nepheline syenite, and is found with microcline and arfvedsonite. Specimens have been obtained from the Ilimaussaq intrusion, Kringlerne, Kangerdluarssuk Plateau, Greenland.

Monazite-(Ce), (Ce,La,Nd)(PO4), can reach to 26 cm in size and over 25 kg in weight! Collectors can expect a varied and interesting crystal morphology that ranges from tabular, prismatic, equant to wedge-shaped character with affluent forms. Twinned crystals are frequent as are contact twins. Massive and granular aggregates also occur. The colour can be white, brown, red, pink, yellow, grey and greenish, and is transparent to opaque. Streak is white to pale brown and the lustre is resinous, waxy to adamantine. Several distinct to poor cleavages are noted with a parting and possess a conchiodal to uneven fracture. It is brittle and has a hardness of 5-5.5. The specific gravity varies from 4.9 to 5.4. It often exhibits the alexandrite effect.The mineral may be radioactive if thorium-rich. Monazite-(Ce) is a widespread accessory mineral of granites, syenites and their pegmatites, in fissure veins, high-grade metamorphic rocks, charnockites and in weathering zones. It is also commonly detrital in river and beach sands. It is regularly associated with zircon, xenotime, titanite, allenite, columbite, wolframite, barite, biotite, feldspars, beryl, quartz, tourmalines, uraninite, cassiterite and many REE minerals. Monoclinic habit, occurrence, physical and chemical properties are distinguishing characteristics.There are countless occurrences for excellent collector specimens. Typical of these can be located in Russia, Norway, Romania, Czech Republic, Italy, Switzerland, France, Congo Republic, Madagascar, Malawi, Namibia, South Africa, USA, Brazil, Bolivia, Japan, Australia and China. Only small gemstones have been cut of this material.

Monazite-(Sm), (Sm,Gd, Ce)(PO4), is the first samarium dominant mineral to be discovered. It is know from the Annie claim No. 3 pod, Greer Lake intrusion, Bird River, Greenstone Belt, Manitoba, Canada and in theBelaya Zima deposit, Sayan Mts,Tuya Republic, Russia. It occurs as miniature tabular, white to pale yellow, monoclinic crystals with a vitreous to greasy lustre. This has a white streak and is translucent in appearance. A good to distinct cleavage is noted and has a specific gravity of 5.5. The mineral is scarce and is found with manganocolumbite in a lepidolite pegmatite. Monazite-like habit, chemistry and limited occurrence contribute towards its identification.

Allenite-(Ce),
(Ca,Ce,La)2(Al,Fe,Fe)3(SiO4)(Si3O12(OH), forms monoclinic, tabular, prismatic to acicular crystals over 90 cm in length.They can show a range of different habits and polysynthetic twinning is common.Well-crystallised material is commonly metamict. Granular and massive habits are also encountered. The cleavage is imperfect to poor with a conchiodal to uneven fracture and is brittle.The hardness is 5.5-6 and the specific gravity is variable from around to 3.5 to 4.2. Various shades of brown, red and black are present, and can be colour-zoned with a vitreous, resinous to submetallic lustre. It can be translucent to opaque. The streak is grey. Physical properties, chemistry and x-rays are useful for distinguishing this species. Allenite- (Ce) is a characteristic accessory mineral of granites, granodiorites, monzonites, syenites, rarely in schists, gneisses, skarns and some contact metamorphosed limestones in large amounts. It can be a clastic member of sediments. Epidote, muscovite, fluorite, quartz, feldspars, various amphiboles, micas, chlorites, calcite, zircon, uraninite, talc and various REE minerals normally occur with allenite-(Ce). Some countries that afford good crystals or rich material follow: Greenland, Sweden, Norway, Finland, Russia, France, Germany, USA, Canada, Mexico, India, Australia, Mozambique and South Africa. Since it is often dark the mineral is seldom faceted apart from cabochons.

Keiviite-(Yb), (Yb,Y)2Si2O7, is a uncommon mineral of pegmatites and occurs with microcline, fluorite, bastnasite, higganite and wulfenite. It forms elongated platy and prismatic crystals that are monoclinic in character. Polysynthetic twinning is frequent.The mineral is colourless with a vitreous lustre. A perfect and imperfect cleavage is present. The specific gravity is high at 5.9 with a hardness of 4 to 5. Its chemistry and x-rays best identify this species. Its sole locality is Ploskaya Mt, Keivy massif, Kola Peninsula, Russia. Minerals containing the element strontium will be discussed next.
John Betterton 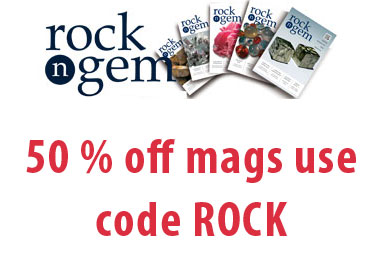 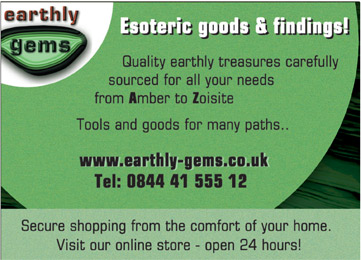 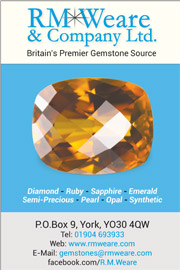 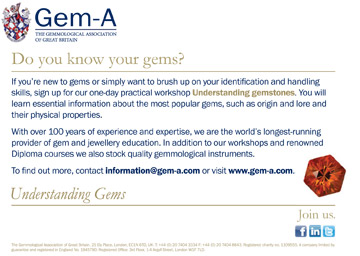 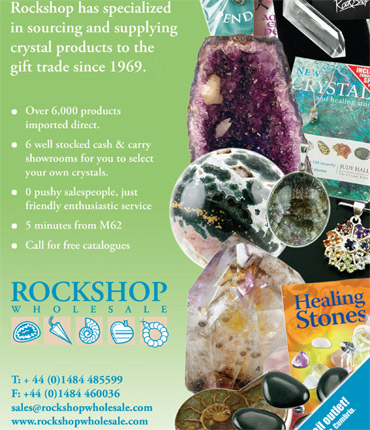 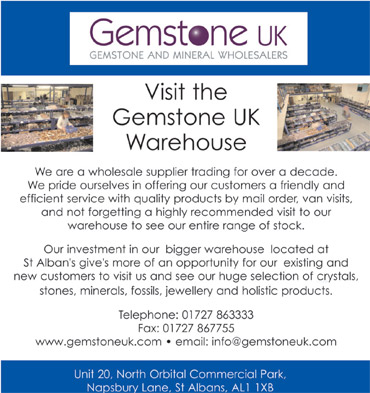 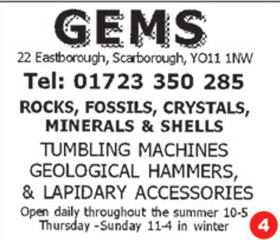 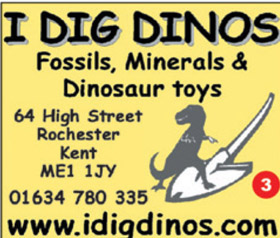 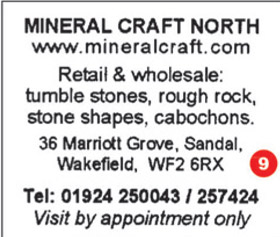 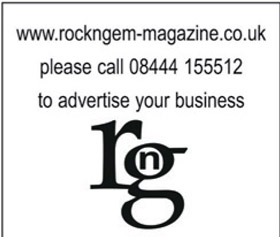 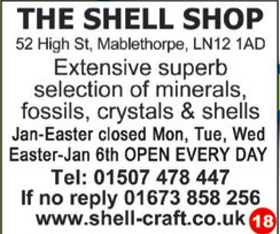